Start a Wiki
The performer most likely to be seen in a sealife park is the bottlenose dolphin (Tursiops truncatus). It is the most familiar and playful of all 32 species of dolphins, often riding the bow wave of boats and surfing waves. Its arc-like leap is a classic image used the world over to symbolize peaceful harmony with nature. Its playfulness, appallingly for those who see it as a cuddly, intelligent and 'smiling' fellow mammal, extends to its hunting. It will often toy with a fish or even a baby seal, flipping it up in the air and batting it about with its tail, before growing bored and killing it. The size of the bottlenose dolphin, which is found everywhere except the polar regions, varies greatly depending on where it lives: from 1.9-4m in length and weighing from 150-650kg. 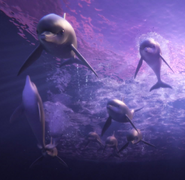 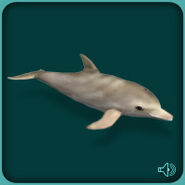 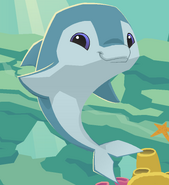 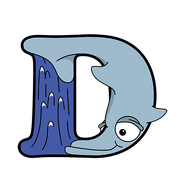 ARKive photos and videos of the bottlenose dolphin

Retrieved from "https://animals-animals.fandom.com/wiki/Common_Bottlenose_Dolphin?oldid=8275"
Community content is available under CC-BY-SA unless otherwise noted.